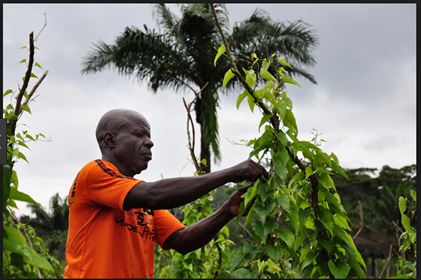 Near the at-that-time hamlet Nung Udoh in Ibibio-land (now Akwa-Ibom State), south of Uyo,  South-East-Nigeria I observed in the period 1959-1964 celtic fields (in Dutch prehistoric raatakkers). I have described the origin of the Nung-Udoh raatakkers as they could have originated in the same way in prehistoric Netherlands. An important factor in Nigeria was and is the high population density, resulting in an annual use of the land and in permanent field boundaries. By throwing weeds on these boundaries low ridges arose. Low parts in these ridges were used as entrances of the fields.