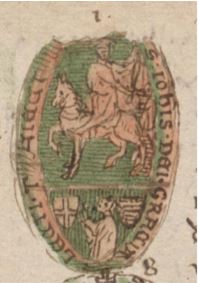 In the second half of the Middele Ages many waxseals were painted. to give the seal another appearance. This act is often not observed by present-day descriptors of seals. Another cause could be that the seals are studied either as casts or as black-white photographs.

There must have been various reasons to paint seals. One of them is the wish of the counts and countesses of Holland to seal with (pale)brown wax. A second is that bishops of Utrecht from 1323 onwards wished to seal with red sealwax. Mostly green wax was available and therefore the seal had to be painted red..

With time the habit of painting seals disappeared, probably, because sealing wax of all colours were locally available, or the sealer took his own wax with him.